The 13th of October 2018, the master thesis of MSc student Sara Roose, concerning anthelmintic resistance in soil-transmitted helminth infections in both animals and humans, was awarded for best master thesis in her major of the year 2018 by the Faculty of Veterinary Medicine of Ghent University. The laboratory work associated with this thesis was performed in the Laboratory of Parasitology of Ghent University (Belgium) and the field work in collaboration with the Parasitology Department of Jimma University (Ethiopia).

The first part of Sara’s master thesis consists of a characterization of the b-tubulin gene family in Ascaris species, including a phylogenetic comparison with gene families of other veterinary and human parasites. Thereafter, the expression pattern of the b-tubulin genes was examined for different life cycle stages and adult parasite tissues, concluding two specific b-tubulin genes possibly important for the emergence of anthelmintic resistance in Ascaris species. Further investigation of mutations (single nucleotide polymorphisms) in those two b-tubulin genes was performed for adult Ascaris suum worms, the worldwide highly prevalent and economically important pig parasite.

To realize the same genomic analysis for Ascaris lumbricoides in humans, adult worms were needed. Therefore, the second part of Sara’s master thesis describes the collection of human soil-transmitted helminths that were collected during a pilot expulsion study in Ethiopia, in the framework of Starworms. 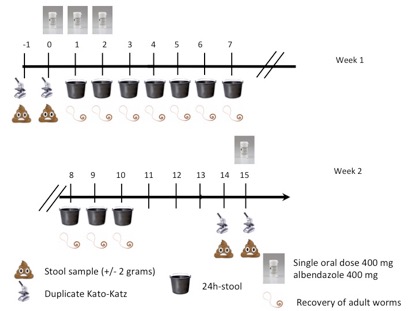 Sara Roose earned her Master of Veterinary Medicine, more specifically a major in veterinary research, at Ghent University in June 2018. She now started her career as a PhD student in the Laboratory of Parasitology where she will mainly work on serological diagnosis of soil-transmitted helminths.